I rarely watch scary movies. This is because I am an empath i.e highly sensitive and finely tuned when it comes to emotions. Jump scare scenes can give me a heart attack but I am trying to be a new person so I gave the sci-fi horror movie ‘Alien: Covenant’ a try. (Big thanks to Anga IMAX and Brew Bistro for hosting the early pre-screening of Alien:Covenant and providing an opportunity for me to man up to my fears)

Now, let’s take a few steps back for a short history lesson. Alien: Covenant is a sequel to the prequel Scott Ridley directed – Prometheus in 2012. It was about outer space and the origin of the species that took place before the original Alien film which is waaaaay back from 1979. Alien: Covenant is set 10 years after the events of Prometheus. Are we together now? Good.

Michael Fassbender who plays a new synthetic assistant (Walter) is eerily introduced in the first scene of the movie. Robot android humans are so weird.  He is supposed to be the assistant for a new colonization mission to planet Origae-6. The movie has a new ship (Covenant) and a completely new crew (because Prometheus had a tragic end obviously) While on the journey to their new paradise (Origae-6), they encounter some damages on the ship that sadly causes some casualties (Sorry James Franco). James Franco who was the ship captain is baked to a crisp 10 minutes into the movie and a new leader, Captain Oram (played by Billy Crudup) takes charge. Katherine Waterston (Daniels) tries to adjust to the loss of her lover as fast as possible.

They decide to pause a bit and fix the damages. While doing this, they hear a strange signal nearby. The sound is coming from a planet that they seem to have missed when finding what planet could best serve as a new human home. To save 7 years of travel to Origae-6, Captain Oram orders the team to go see if the nearby planet is safe enough for habitat.

As is expected in an alien movie, things go South when they set foot on the planet and some of the crew members inhale spores from the planet’s foliage. Unknowingly, these particles make the unlucky person to have breathed them in their host. What happens after about 20 minutes of inhalation is even making me crawl in my own skin as I type this. The strange alien being births itself right out of its human host. I felt nauseous watching that part.

Interestingly enough,  Walter and his team are rescued from the aliens by his ‘brother’ David. David survived the Prometheus crash and has been alone on the planet for a decade. You can tell that this solitude has driven him crazy as his house that he led the crew to was absolutely creepy to say the least.

What follows from here is horror and gore, new realizations, loads of  splattering creepy alien births and great human – alien fights. The characters died off so quickly that I felt like I barely knew them. The plot was super predictable to me but aren’t all horror sci-fi movies? I am proud to say I saw the plot twist from the end scene coming from a mile away and most people didn’t. I won’t spill the beans now though. Just go watch the movie at IMAX and find out for yourself!

You can watch it at ANGA IMAX in the CBD or Panari from May 19th so get your tickets here. 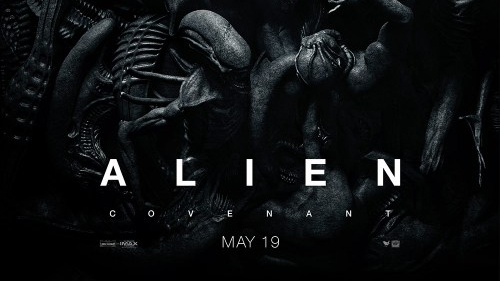